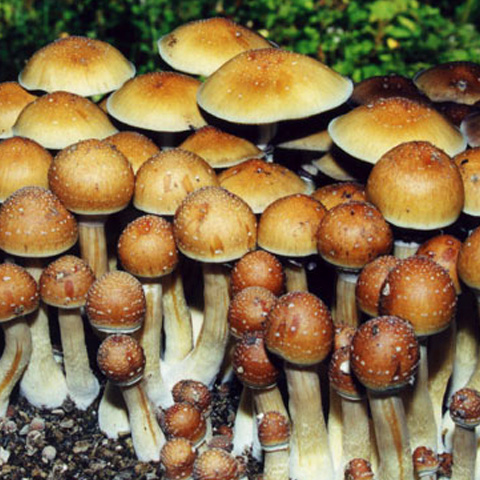 Plantasia Mystery Spores magic mushrooms are easy to grow.  Check your local mushroom growing laws.  Growing mushrooms for identification and taxonomy purposes?  We have your spores!

Cap: 50+ mm in diameter, convex to broadly convex to plane at maturity. Reddish cinnamon brown maturing to golden brown to light yellow because the surface is dry with pronounced and persistent remnants of universal veil on cap (spots) and the flesh is white soon bruising bluish green.

Storage: Store in a dark, cool and dry place and use within six months after delivery!

Habitat and distribution in nature:

Rye grain, wheat straw, horse or cow manure. This species can be found in the subtropical and tropical climate zones all around the globe under the following conditions: Spawn run incubation: 28 °C | Primordia formation: 23.3 – 25.6 °C | Fruiting: 23 – 26 °C

Were very happy to be able to bring this strain to you. As you can see from some of the outdoor pics, it looks a lot like an ps. azurescens, but it is a cubensis. Its very adaptable to many climates and does very well in extreme heat! It loves warm temperatures making it a great summer mushroom.